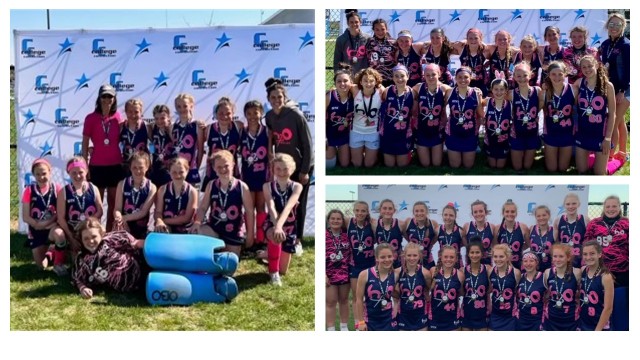 At the indoor season concluding event, USA Field Hockey’s National Invitational Tournament (NIT); H2O won four gold medals – U10, U12 Blue, U14 Pink and U16 Pink each were pool champions.  In addition, for the first time, three teams in an age group qualified for NIT’s.  Our U16 Pink, Blue and Silver teams all made it through qualifying.

Two weeks into the outdoor season, H2O showed that their performance at NIT’s was no fluke as they captured 3 gold medals out of 4 age groups at the prestigious tournament held at DE Turf in Frederica, Delaware.  The four teams at the event finished a combined 16 wins, one loss and three ties.

Shooting Stars youngest age group is U12 and H2O went undefeated in the A pool which is reserved for the strongest of teams and clubs.  The squad went 5-0, the only H2O team without a tie or loss, allowed only 2 goals scored against them, while scoring 38 themselves.

Both the U14 team and the U16 team finished with four wins, no losses and one tie to capture their respective pools.  The U14 team finished their five game draw without letting in a single goal.  They outscored their opponents 10-0 during the tournament and their tie came on a 0-0 game against New York state based club ADK Field Hockey, which was the pool runner up.

The U16 team, like all the H2O teams in the tournament, excelled, especially on defense.  The U16 squad allowed only 2 goals during the tournament both during a 2-2 tie with national powerhouse Central Penn Field Hockey.  After all tiebreakers were exhausted, Central Penn and H2O were named co-champions.

The U19 team finished 3 wins, 1 tie and suffered their teams and the clubs lone loss to a replacement team that was filling in from a higher pool.